Beethoven completed his twenty-seventh work in 1801, called “Quasi Una Fantasia.” It is a complex and riveting piano sonata written in C-sharp minor, a particularly emotional key. The name Moonlight Sonata did not come from Beethoven, but is believed to have been penned by a German music critic and poet named Ludwig Rellstab five years after Beethoven’s death in 1837. The poet Rellstab believed that the sonata sounded like moonlight shining on Lake Lucerne. To this day, nearly every publication uses the term for moonlight sonata either in English or in German (Mondscheinsonate.) 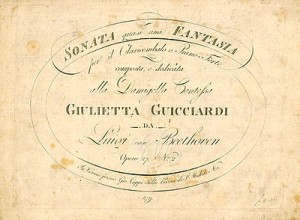 Ludwig van Beethoven, unlike Mozart, wrote in a very different musical style. His time period was shifting from the highly ordered classical era into the rule breaking and rebellious romantic era. His contemporaries in the arts were Thomas Jones, Anne-Louis Girodet de Roussy-Trioson and Eugene Delacroix. They were experimenting in colors, perspectives, themes and mediums. Their teachers all believed in very strict rules regarding art and its creation, while they wished to be free to compose or paint a subject as it exists as opposed to portraying it in a sophisticated light.

This shift away from the rules shows itself in Beethoven’s sonata quite clearly; it is not really a sonata at all. The standard sonata form from the classical period featured a fast-slow-fast-fast movement setup. Beethoven’s Moonlight Sonata progresses from slow to moderate to extremely fast in three tempos.

Regardless of the formal classification, this work features great opportunities for dramatic expression and personality to be brought to the fore for any performer. Beethoven’s works are very serious and contemplative. It is important to avoid abrupt stylistic and dynamic changes. Each crescendo should be meticulously planned to prevent a sweeping increase in volume. Instead, a subtly increasing volume maintained over the length of the phrase embodies the heart and soul of Beethoven.